The Hunt – Thrill of the Hunt 2 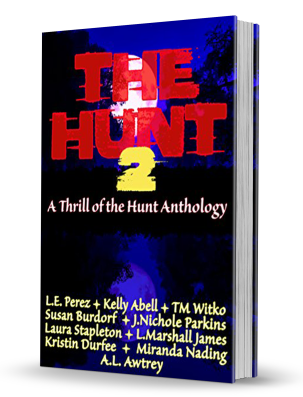 When They Call~L.E. Perez
Samantha Barry was clinically dead at the scene of a horrible motorcycle accident, when they called. When she opened her eyes a week later, Sam quickly realized she wasn’t alone. What she discovers is beyond her comprehension and sets her on a path back to the night she died. If only she hadn’t answered when they called.

Monster in the Woods ~ Kelly Abell

When seventeen-year-old Graham Sawyer stumbles on an abandoned hunting cabin. Nothing could have prepared him for what’s inside. His first instinct is to back out the way he came, try to forget he ever found the place. But he hesitates. That hesitation that changes his life forever. A monster roams this forest, torturing the innocent. Question is, can Graham turn the tables, changing the hunter into the hunted?

Horror in Grieselton ~ TM Witko
In the small town of Grieselton, Georgia an evil has just been unleashed, only no one realizes it… yet! When her patient, Brody Fisher, tells her of an evil presence that whispers to him, telling him to do bad things, Dr. Samantha Mathewson thinks he’s delusional. Will it be too late to save her patient and herself or will she become the victim of a terrible horror that will haunt her once peaceful town.

Gone Fishing ~ Susan Burdorf
The body of a local gambler is pulled from a lake which sets in motion a series of mysteries for Sheriff Pete Malone to solve. When his sister, Belle, discovers clues that could help solve the murder, the killer begins to stalk her pushing up the timeline to solving the killing before Belle becomes the next victim.

Reflected ~ J.Nichole Parkins
What do you see when you look in the mirror?
Marigold Wilson sees regret.
A reflection of a life half-lived, a prison built with debt and depression.
Until one day her reflection looks back at her and doesn’t like what it sees.

Escape ~ Laura Stapleton
The beginning of the end. When a virus destroys the Earth’s plant life, colonizing other planets is the human race’s last hope. Countries band together and create seven Advanced Relocation Colonies, sending them to habitable worlds. Between massive extinctions, bureaucracy, malfunctions, and anti-colonization terrorists, can humanity survive?

11:34 ~ L.Marshall James
Eleven thirty-four.There is nothing particularly special about the numbers, nothing unique about the time. To most people, it is a 60-second period that happens twice a day. It is something altogether different for me. In the darkness of night, in a flicker of time too quick to discern, an old woman appears. I don’t know who she is, where she’s from or what she wants. All I know is that when she appears, the time is eleven thirty-four.

Revenge from Within ~ Kristin Durfee
A parolee is gunned down in the streets of Seattle on his walk home from work. A woman accused, but acquitted, of murder is killed in her backyard. A vigilante is on the loose and seeking justice for those who’ve escaped it. Detective Stef Jackson and her coworkers are on a race to track down who the killer is, but what happens when the revenge comes, not from outside forces, but within?

Game Night ~ Miranda Nading
A group of retired women in small town America get together once a week to play poker. When one of their own murdered, and a chess piece left behind by the killer, Ruth knows something more sinister than a random act of violence has touched their lives. With her own chess piece in hand, Ruth is pulled into a game where the winner truly does take all, and the loser pays the price.

When the Water Burns ~ A.L. Awtrey
When Tomas meets the beautiful and talented Kyla singing at the Parrot Dice Bar and Grill he hopes that she will eventually return his affection. But Kyla is an Ondine. Her kind were the truth behind legends like mermaids and the Sirens of Greek myth. When Veto Quesada comes into the bar, Tomas immediately recognizes the danger he represents. Kyla’s fascination draws Veto’s attention and Tomas must risk everything.