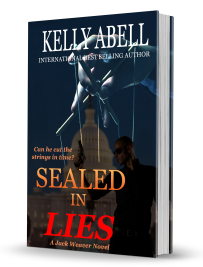 I’m excited to announce:
Sealed In Lies
Book 1 in the Jack Weaver Series
CIA Operative Jack Weaver finds trouble wherever he goes. This time the nation’s security depends on him and the one woman who may tame his heart.

Undercover for the CIA, Ex-SEAL Jack Weaver has poked his nose into the wrong computer file. Working as the top security man for the world’s largest drug cartel, Jack discovers a plot to assassinate his new Commander In Chief on Inauguration Day. The puppet master controlling the strings is a terrorist calling himself the Emperor. Not only does he have the cartel leader at his beck and call, but Jack discovers a horrifying connection to his old SEAL team. What are the odds? Forced with a choice, Jack shoots first. Now he’s a rogue agent on the run from multiple enemies. He needs answers to clear his name and knows just where to find them.

Caroline Walters is living her own life of lies. Married to Vice-President Elect, Warren Walters, she never dreamed her genteel upbringing would result in a marriage of horrors. Constantly abused, she prays for freedom. The night rogue spy Jack Weaver breaks into her home her prayers are answered. Caught seeking information, Jack forces Caroline to come with him.

Jack continues his quest while dragging along the attractive wife of his old SEAL teammate. She turns out to be more help than hindrance, and an attraction develops neither can ignore. Guided by horrible nightmares from his past, Jack and Caroline rush to find the identity of the puppet master from hell before he can destroy what they both hold dear, including each other.

Originally released in 2010 this riveting story has received a much needed make over. Author, Kelly Abell, proudly presents this new and improved edition.

I am a writer, blogger, and graphic artist. My aim for you is to utilize this blog to help you improve your writing skills, and to educate you on the publishing business. If you need help with writing, want to self-publish a book and need advice, or just want to kick a story idea around to see what works best, that's what I'm here for. As I gain knowledge from editors and publishers, I will share that knowledge with you. As writers we should always strive to improve our craft and grow. A day should not pass where you haven't learned or tried something new with your writing. Many thanks to my Night Owl Friend, Lea Ellen Borg for editing my posts! Best to you and all your characters and stories. Write on, my friends...Write on.
View all posts by Kelly Abell →
This entry was posted in Uncategorized. Bookmark the permalink.