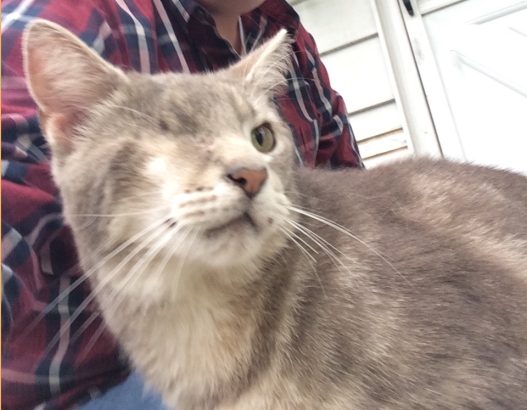 This week I’d like to introduce you to One-Eyed Jack. Based on a real animal, he is the cat with a huge personality in my short thriller story Of My Blood in The Hunted Anthology. Jack can understand human words and emotions and in this story he does his best to teach Jayla about her new found inheritance and family blood line.

He may have created a monster in Jayla though. Once she realizes her power and what she can accomplish, she struggles whether to use it for good or for evil.

Here’s an excerpt from the story:

After breakfast, Jayla dressed in an old pair of jeans and tank top. She grabbed a pad and pen to take inventory then trotted down to the kitchen. The cat, stretched out on a braided rug under the kitchen table, lazily opened his eye, gave her a cursory glance then closed it again with a deep cat sigh.

“Guess you’re not coming along for the journey, huh?”

He emitted a guttural sound and rolled over, his pearl-gray fur flattening beneath him.

“Fine, be that way.” She paused. “You know, I really should give you a name. You look like a pirate with that slit eye of yours.” She knelt in front of him, tapped him on each shoulder with her finger. “I dub thee One-eyed Jack.”

Jack’s eye opened, and Jayla could swear he rolled it at her.

“Okay, so I’m not very imaginative when it comes to naming animals. Don’t like it? Too bad.”

Jack meowed. He stood and stretched then bumped his head against her hand.

He bumped her again then reached out with a paw and scratched her. Not deep. Just enough to remind her who was boss.

“Ow, you bastard.” She rubbed the rising welt. “See if you get another can of food from me.” She got to her feet. Even if he was a pain in the ass, she liked the tough old cat. Not one for pets, her sentiment surprised her.

She turned toward the heavy wooden basement door secured with three steel deadbolts.

She turned the locks and pulled the door open. It creaked, sending a shiver through her. “Sounds like a door in a horror movie.”

She flipped up the light switch. The floor at the foot of the stairs lit with a sickly yellow glow.

At the bottom of the steps, she surveyed her surroundings. Only two bulbs lit the voluminous space. Bare brick walls connected with a concrete floor. Within the pale circle of light, she could see stacks of boxes, discarded furniture, racks of old clothes, and shelves of jarred goods filled with God only knew what. What the light couldn’t reach remained in deep shadow. Immediately overwhelmed, she plopped down on the bottom step.

“Holy shit. I don’t even know where to start. This is a lot of stuff.”

Jack meowed. He glanced up at her. Jayla swore he shook his head as if to say, “You’re pathetic.” He then sauntered to an old rolltop desk. He hopped up on the chair and pawed the jointed top.

Astonished, Jayla joined the cat. “Are you saying I should start here?”

“Huh. Well, aren’t you the helpful cuss. Let me look around first, and then I may just take you up on your advice.”

Jack shrugged and settled into the chair.

She wove her way through the stacks of debris, glancing back and forth to take in the massive room. It covered the full length and width of the house. As she moved toward the wall closest to the woods, she spotted an old tapestry hanging on the wall, the design obscured in shadow.

“I wish I’d brought a flashlight.”

She jumped at the sound of a metal object rolling across the concrete floor. She glanced down to see a long metal flashlight. Jack stood a few feet away.

No way. Her skin crawled, her heart skipped a beat. Wow. Can he understand what I say? Too weird.

But being an accomplished archeologist, she’d seen weirder. “Thanks, Jack.”

The cat turned, flicked his tail, and returned to the desk chair.

After picking up the flashlight, Jayla switched it on. The beam shone on the beautiful needlework. The threads had faded a bit, but she could make out the design of a town. Not a map per se, but a rendition of the main street and a few prominent buildings. A church, what appeared to be a town police station, several stores, and a few restaurants.

She moved the beam down to the bottom corner, revealing a picturesque covered bridge. The road came through the bridge to the center of town and wound up into the top left-hand corner where it disappeared. Scattered throughout the rest of the design were houses, large and small.

Across the bottom of the tapestry were stitched the words, White Bridge.

“What a cute town, Jack. I wonder if my grandmother lived there? Wonder if she did this tapestry?”

The cat answered with a muffled meow.

She studied the needlework. The buildings didn’t appear too old in design. Perhaps the early 1800s. Where was this place? Nearby? Far away from here? Had her grandmother done this tapestry to remember a place where she grew up?

She fingered the edge, admiring the workmanship. Suddenly, the wall hanging jerked to the left, the bottom edge bumping against her leg. She glanced down, and Jack stared up at her, the corner of the tapestry in his teeth.

She pulled the hanging out from the wall and shined the flashlight behind it. “A door. And this one has three locks, too.” She stared down at Jack. “Where does it go?”

The cat’s expression said, “Well open it, stupid, and find out.”

Apprehension flowed through her. Sweat popped out on her forehead despite the cool, damp room. Hidden doors led to hidden rooms or worse. She’d watched enough horror movies to know this was a door people screamed at the characters on the screen not to open.

The cat bumped her leg.

He bumped her leg again, meowing.

“People don’t cover doors with tapestries and triple bolt them if they want you to go in. That usually keeps something out.” She dropped the wall hanging back in place.

Jayla turned away from the door. “No. I’m not going in there.” She glanced over her shoulder. “Not yet, anyway.”

If you enjoyed the excerpt and want to know more about old One-Eyed Jack, buy the book! It contains wonderful thrillers from multiple authors. All the proceeds of this book goes to St. Jude’s Children’s Hospital, so I hope you buy it and tell your friends about it. 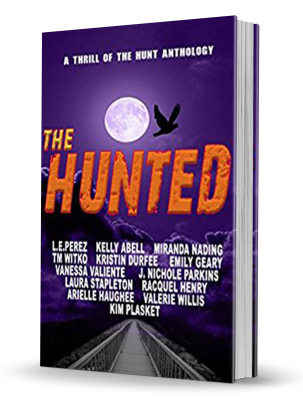 I am a writer, blogger, and graphic artist. My aim for you is to utilize this blog to help you improve your writing skills, and to educate you on the publishing business. If you need help with writing, want to self-publish a book and need advice, or just want to kick a story idea around to see what works best, that's what I'm here for. As I gain knowledge from editors and publishers, I will share that knowledge with you. As writers we should always strive to improve our craft and grow. A day should not pass where you haven't learned or tried something new with your writing. Many thanks to my Night Owl Friend, Lea Ellen Borg for editing my posts! Best to you and all your characters and stories. Write on, my friends...Write on.
View all posts by Kelly Abell →
This entry was posted in Uncategorized. Bookmark the permalink.